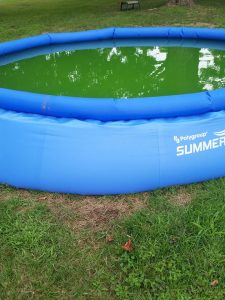 There’s nothing wrong with your eyes…that is a pool with water greener than the grass. The water was so concentrated with algae, I couldn’t even see the bottom of the pool. Ava swam in it with her friends the other day, and when I saw it later, I said a prayer that she wouldn’t get sick. Haha, little did I know what a benchmark that little pool would be yesterday.

The night before the floods came, there were prophetic declarations over the land, cries for revival, and earlier a speaker had encouraged us to build our lives around our promises, not around our problems.

The next day, the floodgates burst, and the torrents of rain fell as if it hadn’t rained in years. So as they prepared for a community wide celebration, our friend’s renovated barn and house next door flooded. You would expect the usual anxiety and frustration, and I’m sure there may have been some, but it was all hands on deck to bail out water and divert the exterior flood currents away from the buildings. There was so much joy, and song and dance, even as their property was getting submerged in the deluge. Soaked individuals came and went out the open doors, taking buckets of mopped up water with them, and gradually the water was bailed out faster than it was coming in. It seemed we would weather this storm

There was a bit of a lull, so I called Frank to see how everything was going at home. As we are chatting, I go outside, and then I hear it. This carefree laughter, squealing, and cheering…and then the chant started. I peer across the parking lot, and there are about 15 people surrounding that pool, and the person who’s name is being chanted louder and louder, breaks into a run, plunging headlong into the pool. They did it over and over, cheering and yelling after each plunge, as they were having the times of their lives. If someone else came out of the barn, soaked and tired, the group would yell and invitation over to them, and they too, would break into a run and take their turn to jump in.

I regret it a little that I was trying to stay dry, playing it safe under the front porch at the church…but I saw something that day. I was blessed to see it. That those individuals decided to work together, to build a genuine community that felt like family. It rained on their parade, so they sang and danced in the rain. They got lemons, and they decided to made lemonade. A group that refused to build their day around their problems, and built around their promises instead. Promises of fellowship and love, of peace and laughter. I was so impressed that instead of pride like Naaman refusing to dip in the Jordan, these friends had decided to embrace the day, and the “Hey the pool has water and we’re already soaked, so let’s just go for it” attitude.

Tom & Cori we had a blast. You guys inspire me so much. Thank you so much for the fun, the food, and the fellowship. It is a priviledge to know you and call you friends. Looking forward to the next time we get together.

Also thanks to Scott and Sarah MacLeod, the Thunder School, and Mike and Theresa Carter. The stories, impartations, art, music and dance will stay with us forever. Thank you for your faithfulness, love and grace. It was a pleasure to get to know you all.